These eight companies own most of the cable channels you want, as well as many of those you don’t, which gives them enormous power.

Mega Consolidation - The Big Get Bigger 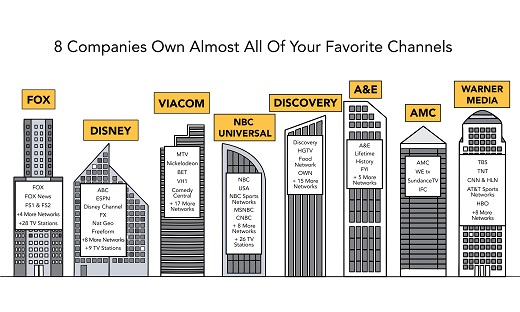 How does consolidation impact you? It’s a matter of power: just a handful of multi-billion-dollar corporations own or control most of the content that is available. To increase revenues and viewership, mergers in the media industry have become routine in recent years. This has resulted in a few large companies owning a large proportion of US newspapers, TV and radio stations, broadcast networks, cable networks and major internet sites.

These powerful companies control not only the content of what you see but also what you pay for by leveraging their size in negotiations for content carriage and fees. Here is a short list of recent and pending consolidation among media companies:

Nexstar Media Group announced in early December it will buy Tribune's 42 television stations and cable network in an all-cash $4.1 billion deal. The merger will form the nation's largest TV station company. The acquisition comes four months after Sinclair Broadcast Group's attempted purchase of Tribune was terminated. The two companies are still embroiled in lawsuits over the failed merger, which came under intense scrutiny from government regulators and criticism from public watchdogs.

The Walt Disney Company announced it will acquire 21st Century Fox for $52.4 billion in one of the entertainment industry’s biggest deals. Closing sometime in early 2019, Disney gets Twentieth Century Fox movie and TV studios, most of its cable networks and international assets. Not included in the deal are the Fox network, Fox owned broadcast stations and Fox News. Analyst Paul Verna said to Forbes, “… there is no benefit to consumers that I can envision. If anything, the alliance will result in fewer choices and higher prices, since it will consolidate ownership of important content and distribution properties under one roof...”

The Wall Street Journal wrote about this $14.6 billion deal that, “…the rationale behind the merger is that the combined company will have greater scale when negotiating with pay-TV providers.”

In January of 2011, Comcast Corp. completed its takeover of NBCUniversal, creating a $30 billion media colossus that controls not just how television shows and movies are made but how they are delivered to people’s homes. The merger had conditions that require Comcast to submit to certain terms and conditions when dealing with other TV providers. In January 2018, those conditions expired, and so there are no longer controls on how Comcast can negotiate its "must-have" programming, such as cable networks, regional sports networks, NBC's local TV stations, and NBC's national programming.