Why Do You Pay More for Sports Programming?

Sports leagues are demanding higher and higher fees for sports rights from broadcast and cable networks.

The NFL alone makes a little over $7 billion per year for broadcast and cable rights to air their games. Combine that with the MLB, NBA, NHL, MLS, college and other sports - and you can quickly see the impact this has on your monthly video bill. 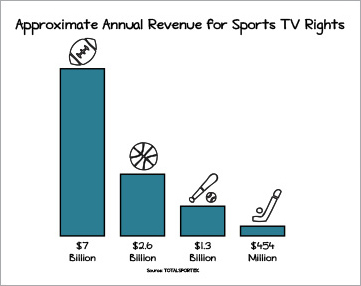 Rising Sports Rights Is Big Business:
In the beginning teams and leagues made most of their money from charging individuals for admission to their games – until they realized that TV rights provided them the opportunity to make more money by charging TV providers high monthly fees year-round. Today, TV rights represent the bulk of a league’s revenue. Rising sports programming costs impact customers in two ways: broadcast stations charge higher retransmission fees and cable sports networks charge higher programming fees… and both directly impact your monthly bill. 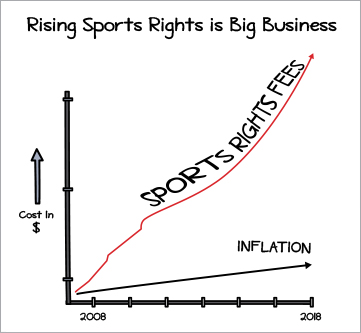 Originally, most games were free on broadcast TV. Then along came ESPN and changed the TV sports landscape. Soon, Regional Sports Networks (RSNs) like FOX Sports and Comcast SportsNet began to offer games from different leagues. This not only created more demand for league and college programming but started a bidding war between both broadcast and cable networks – driving the price up as the popularity of each sport grew. Soon RSNs, which originally carried all league sports on one network, started creating individual networks for each individual team. 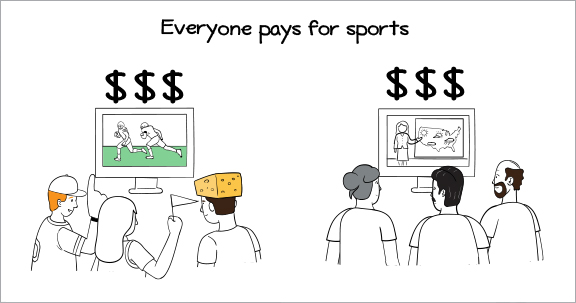 Everyone Pays for Sports:
Each of these new networks started to demand new fees, so instead of paying a single fee for all games on one network, providers were forced to pay fees for multiple networks for the same programming. Now, many leagues, conferences and teams, including college sports, have their own networks – each with its own high fee, yet offering little or no additional games. In order to get the biggest audience possible, sports networks require providers like Frontier to include expensive sports channels in our most popular packages. This forces everyone, both sports fans and non-sports fans alike, to pay for their networks.