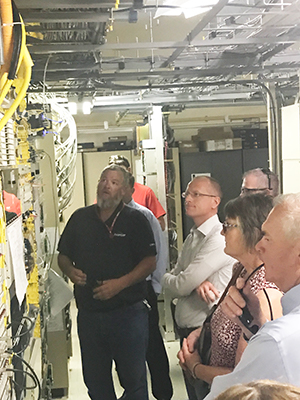 We had a great visit on Tuesday, May 29, with FCC Commissioner Brendan Carr, Nebraska PSC Chair Mary Ridder, and Commissioner Rod Johnson. Frontier's Nebraska Connect America Fund Phase II ("CAF II") team shared the successes of the CAF II program, gave the commissioners a tour of our Columbus, Nebraska central office, and showed the hard work that goes into trenching and laying fiber.

Frontier's CAF II team discussed the types of investments we are making to extend broadband to 3,400 rural Nebraskans.

Starting in the Columbus central office, which is the main hub for Frontier internet traffic in the area, we explained the fiber build we were busy undertaking to improve speeds for the nearby communities of Monroe, Genoa, and Albion.

Frontier explained that these investments ensure 10/1 Mbps speeds and often result in speeds up to 25/3 Mbps or faster for roughly a quarter to a third of CAF II households, with some households as fast as 115 Mbps down.

Additionally, by driving fiber further in the network, CAF investments improve available service for 2–3 nearby rural homes for every 1 CAF II home. 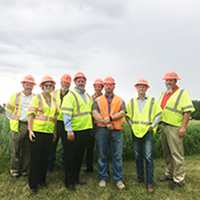 Frontier's CAF II team also discussed the two fixed wireless sites that they plan to build in Nebraska this year in the Pleasanton and Kearney areas. Fixed wireless is an important tool in the toolkit in very rural areas, and in the right scenarios, especially in rural flat areas like Nebraska, it can efficiently enable faster broadband to more people.

From the central office, Frontier took the commissioners along a fiber run where the crew was trenching and laying 20 miles of fiber that will improve available service to approximately 1,000 households in Monroe, Genoa, and Albian.

We discussed the technical trenching and fiber-laying process and gave the commissioners an up-close view of the equipment. 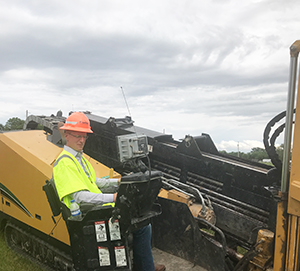 We also discussed some of the biggest challenges to our rural broadband deployment other than the sheer lack of population density. For example, permit delays by cities, counties, states, and federal agencies in addition to railroads can delay deployments by 3–6 months or more and make it tough to meet deployment deadlines.

Thanks to Commissioner Carr, Chair Ridder, and Commissioner Johnson for visiting us, and we look forward to continuing to partner to reach all rural Nebraskans with broadband.