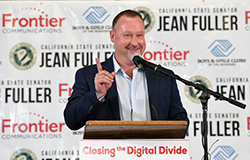 Joe Gamble, Senior Vice President, West Region commemorates the opening of a new computer lab and installation of a Wi-Fi hotspot at the Boys and Girls Clubs of the Sequoias on June 22nd.

As the American economy continues to become more tech-centric, there is a growing universal realization about the importance of giving today's children tools to succeed tomorrow. Ensuring this happens takes the focus and effort by all—from legislators and the private sector to nonprofits and individuals—which is why Frontier is doing something to help.

On June 22nd, Frontier paid a visit to the Boys and Girls Clubs of the Sequoias in Exeter, California to help make a difference. Joining State Senator Jean Fuller, we completed the installation of a Wi-Fi hotspot at the center, while also dedicating an educational computer lab for the kids. The event was warmly received all around, and the kids' excitement was nothing short of palpable.

On the surface, Frontier's contribution might seem simple. But last week's visit wasn't just about better internet or a new computer lab. It was about investing in our future, and ensuring the next generation is equipped to succeed in the 21st century. As Joe Gamble—Frontier's west region senior vice president—said, "our company is committed to this mission. And we believe our visit proved it can be achieved, especially when multiple organizations and people come together." 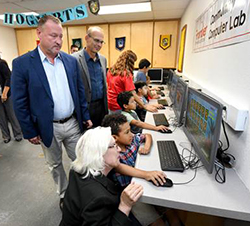 Frontier's work in California isn't limited to a single event in Exeter. Across the state, we're working tirelessly to help connect thousands of rural Californians through our Connect America Fund efforts. Under this initiative, we are building new broadband infrastructure, installing public Wi-Fi hotspots and offering affordable broadband service to people in the most underserved parts of the state. On paper, it means a $228 million private-public investment to California deployment and 90,000 newly-enabled broadband connections by 2020. But the truth is the impact runs much deeper than that.

Better connectivity in rural California—a place that has seldom had it—makes all the difference in many people's lives. It means better access for students in the San Joaquin Valley to do homework. It ensures the ability for adults around the Mojave Desert to take care of job applications, doctor's appointments and Skype interviews. It makes worker training easier for employers in the Northern California mountains, and allows municipalities everywhere to provide better government service and public safety. Ultimately, broadband access empowers everyone to participate in the expanding digital economy, and ensures anyone can thrive in our now-digital world.

Frontier has a lot on its plate in California in the coming years. Our investment in the Boys and Girls Clubs of the Sequoias is just one small step. But over time and with more progress, we will see more and more people equipped to live better lives. That's a major goal in our CAF work, and we're excited to make it a reality for all.