Connecting communities and creating opportunities is our goal at Frontier. We take time and care in ensuring that any American can be a part of our digitally connected world. In some of the most hard-to-reach communities, this promise can be harder to uphold, which is why we are committed to working with our federal and state regulatory officials and elected leaders to close these gaps.

This promise starts with mapping. Today, we are excited to announce we are launching a broadband mapping pilot program, together with USTelecom, AT&T, CenturyLink, TDS, Verizon, Windstream, ITTA, and WISPA, to improve our national broadband maps. 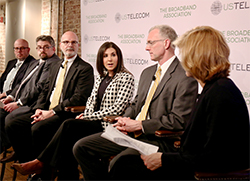 There has been increasing recognition that the current broadband maps are in need of an update, especially since they are the foundation of the public-private partnerships, like the Connect America Fund (“CAF”), that fuel rural broadband deployment. Under the existing framework, we report broadband reach by census block. While this works in more populated areas, it can hide unserved homes in more rural areas, where a single census block in some cases may encompass an entire county. Without more detailed data, governments and companies don’t know exactly what areas have access to broadband and what areas don’t.

Using the current maps, the FCC and companies like Frontier have done a great job at reaching many of the areas that we know don’t have broadband through programs like CAF. But now we have to roll up our sleeves and get more granular, which means working together to create a broadband map showing whether each and every 150+ million US locations have access to broadband. Any task this ambitious requires working hand-in-hand with all stakeholders, including consumers, local governments, and the FCC.

Thanks to rapid advances in satellite technology, crowdsourcing, data analysis, and artificial intelligence, we believe this level of detail is now possible – a task not feasible even a few short years ago. Our pilot program will launch today in Virginia and Missouri, and we hope to show that mapping can be done in a better and more efficient way nationwide.

A map with this level of specificity will allow us to truly know where broadband is, where it isn’t, and where to target taxpayer and company resources. Moreover, this intensive reporting will ensure we avoid using scarce public resources to fund broadband where connectivity already exists and instead target it where it is needed most.

We believe that this pilot program will show that a broadband map the country deserves – accurately reflecting the state of broadband at every location across the country – is achievable. Armed with this information, we can continue improving our public-private partnerships and target the communities most in need of broadband. Frontier hopes that this next-generation broadband map will help pave the way for a more connected America.