What is the work that goes into the Connect America Fund (CAF) rural deployment, and how are Frontier, the FCC, and Universal Service Administrative Corporation (USAC)1 teaming up to tackle the Urban/Rural Digital Divide? Frontier took USAC on a one day, 100-mile bus tour to show how we are rolling up our sleeves to roll out faster broadband in some of the hardest to reach places. 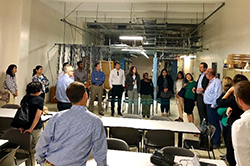 Embarking early in the morning on an Autumn day, more than 15 USAC employees departed from DC to tour Frontier facilities in Martinsburg and Berkeley Springs, West Virginia. The route—starting in an urban center, with Northern Virginia housing one of the largest internet exchange points on the planet and continuing to the rural and lightly populated CAF areas just one hundred miles away—allowed the group to trace the path of the greater internet to a rural user (and back). Observing each step of the broadband deployment path, the group witnessed firsthand how necessary CAF funding is to increasing broadband deployment to enable faster broadband speeds for more people. They also learned about the challenges that come along with trying to reach some of the most remote places. 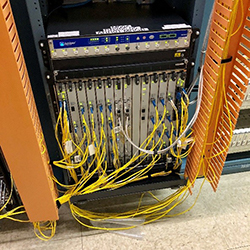 The group stopped first at the Frontier Martinsburg Central Office, a critical Internet hub for this northeastern part of West Virginia. The group discussed the different types of equipment upgraded at more than 200 sites in the state as part of the CAF 2 program so far, which has enabled improved speeds to more than 45,000 homes and business in CAF areas and more than 150,000 additional nearby homes and businesses. The group then toured the office, looking at the types of upgrades necessary at an internet hub—even if not rural itself—in order to enable faster rural speeds. USAC also saw how next-generation technology and the move from analog to digital requires significantly less space while providing dramatically faster speeds—like the computing revolution and Moore’s Law more generally, equipment that once took up entire rooms has been shrunk into single boxes that can sit on top of a desk. 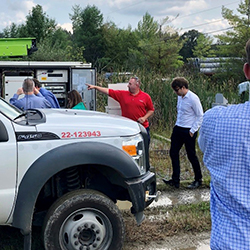 From Martinsburg, the group drove along the miles of fiber that had to be laid to bring higher speeds to the rural Berkeley Springs Central Office—a community receiving a large amount of CAF investment. Berkeley Springs is the county seat of Morgan County, where Frontier’s CAF investments have enabled access to improved broadband speeds for 22 percent of the households in the county since November 2015. In Berkeley Springs, the group saw the same types of internet hub upgrades as in the Martinsburg location but on a smaller level.

Finally, the group drove to an even more remote area, along one of many necessary CAF fiber deployments from the Berkeley Springs office to an upgraded digital subscriber line add-drop multiplexer (DSLAM)—often the closest point of a CAF upgrade to the customer home. Frontier set up a WiFi router at the box, and USAC members tested the connection on their mobile phones with speeds blazing past 100 Mbps at this rural cabinet. Frontier explained that nearby homes can receive speeds faster than 100 Mbps, with a quarter or more of CAF homes receiving speeds faster than 25 Mbps.

All agreed that the day was educational and a great success, allowing Frontier to demonstrate to USAC how impactful the CAF program that they administer is. Starting out in the figurative center of the internet, the group drove along and toured the 100 miles of CAF investments—the fiber, the routers, the offices, the cabinets—to get a taste of the hard work, engineering strategy, and coordination it takes to make sure broadband is delivered far and wide.

1 USAC, with the guidance of the FCC, administers the CAF program, including the $330 million annually distributed to Frontier to expand broadband and connectivity nationwide to 775,000 homes and businesses where needs are critical. In addition to CAF, which is part of USAC’s High Cost portfolio expanding the reach of broadband, USAC also administers the Lifeline (low-income), E-Rate (Schools and Libraries), and Rural Healthcare programs.