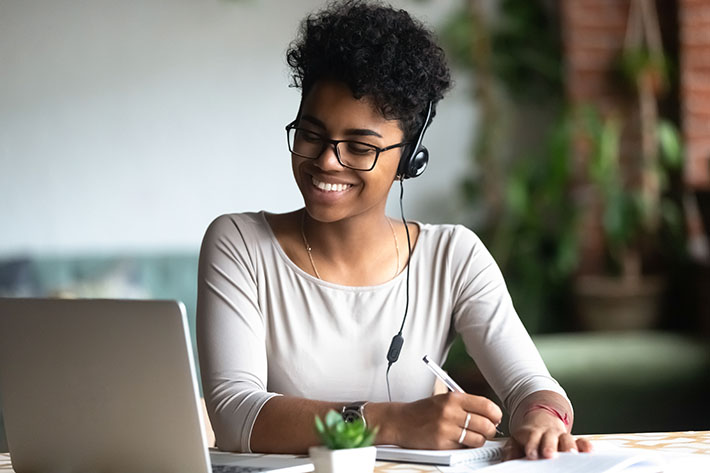 This article will discuss home internet phone service, also referred to as voice over internet protocol (VoIP), including the benefits it provides and the many options available.

How do internet/VoIP phones work?

Traditional telephones work by taking the sound energy from your voice and converting it into an analog electrical signal that then travels through copper wires to whomever you are calling, where it's converted back into sound through a speaker.

In contrast, VoIP takes the initial sound signal and converts it into digital packets, which are then sent to their destination through an internet connection — much in the same way an email or file might be sent.

The actual VoIP phone itself can take on one of two forms: It can either be a physical phone that's set up to handle VoIP connections, or it can come in the form of software-enabling VoIP calls through your tablet, cellphone or another device. Note that incoming calls can even be forwarded to a traditional phone line connection, as well.

Physical VoIP phones look and operate the same way as traditional landline or desk phones, but the two are not identical. In other words, you can't just plug in your old landline phone and make it work with a VoIP connection. Instead, if you want a traditional phone experience, you will need to purchase a VoIP-enabled phone.

These phones look and operate just like a landline phone, with all the same features, including a number pad, caller ID, speed dial and so on. They typically connect to the internet with an ethernet cable, just like you would use to connect your computer to the internet. In fact, these phones are often equipped with power over ethernet capabilities, meaning they receive their power through the same ethernet connection and don't require a traditional plugin or access to a power outlet.

Some VoIP phones also come with wireless or cordless options, allowing you to connect to the internet through Wi-Fi instead of ethernet. These phones might be battery-operated or require a traditional power connection.

Software-enabled VoIP phones are any device that you can download software onto (that also have a speaker and microphone). This could be a tablet, smartphone or traditional desktop or laptop computer. You can even enable the application on multiple devices both at home and beyond — meaning you can make and receive VoIP phone calls from anywhere and from any enabled device.

As you might be aware, there are several types of broadband internet connections. This includes DSL, cable and fiber-optic internet. The good news is that just about any internet connection will work for VoIP. The important feature isn't the connection type, but the upload and download speeds.

Your connection speed or bandwidth is what determines how much information you can send and receive through your internet connection at a given time. The more bandwidth, the more information — which translates to more concurrent VoIP calls and/or clearer signals.

The minimum requirement for most VoIP options is usually less than 0.5 megabits per second of download speed. Today, even the most basic internet connection exceeds this by quite a bit. Whether you choose Frontier's Basic Internet plan or our Fiber Internet option, you'll be sure to have a connection that works with your VoIP.

Why use a VoIP phone?

VoIP service for your home comes with a multitude of benefits, including the following:

When it comes to choosing a VoIP provider, Frontier is happy to be leading the way with our VoIP services. We offer home phone service over your internet connection through our Frontier Home Phone. With our Home Phone plan, some advanced features you can enjoy include:

Having been in the business of connecting people for decades, we promise excellent network connectivity so you don't have to worry about dropped calls. Call clarity also means no worrying about static on the line, either. You can also bundle your home phone plan with Frontier internet service for additional savings.

Whether you're calling into work meetings from home or just looking to save minutes on your cell phone plan, adding Frontier Home Phone service is just a few clicks away. Exact plans vary by location, but you can find out what's available in your area with our availability checker.

Discover the speed of Frontier

Before you can get VoIP service, you need a reliable high-speed internet connection. After all, you don't want your calls to break up or drop, especially if you're mid-conversation.

Frontier Fiber Internet and high-speed internet offer some of the fastest speeds around. This means clear and reliable VoIP calls, in addition to the ability to share large files, stream in high resolution and power multiple devices simultaneously. Learn more and enter your address to see what's available in your area.