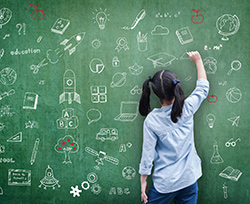 A highly-anticipated and potentially bipartisan proposal emerging from the new administration is President Trump's $1 trillion plan to rebuild this country's infrastructure. In addition to funding for traditional transportation and utility infrastructure—to fix the crumbling roads, bridges, airports, electrical grid and water systems—Members of Congress, industry leaders, and constituents have voiced support for the inclusion of broadband, recognizing that a 21st century infrastructure policy must include the network that transports data throughout the United States.

This country's longstanding telecommunications principle of universal service—ensuring that all Americans have access to services—should be the primary goal of any broadband efforts. Despite the $70+ billion that ISPs invest in the network annually to deploy and upgrade service throughout the country, there are many areas that are too costly—due to low population density or challenging topography—to justify 100% private capital investment to serve. The initial goal of any broadband infrastructure program should be to ensure that these unserved areas have access to affordable, reliable broadband.

Over the past decade, the federal government has undertaken various broadband funding efforts. In 2009, the economic stimulus package made over $7 billion available for broadband projects, including grants and loans through the NTIA's Broadband Technology Opportunities Program (BTOP) and the Rural Utilities Service Broadband Initiatives Program (BIP). These programs had some successes, but were not executed as proficiently as the taxpayers deserved. In some cases, inexperienced entities were granted funding for complicated projects that were never fully executed. In other cases, projects were funded in areas that already had broadband access, rather than unserved areas. While some projects achieved their intended goals, in full, the programs did not yield an efficient or complete return on investment for American taxpayers.

With lessons learned from BTOP and BIP, the FCC modernized its Universal Service program with the Connect America Fund (CAF) in 2014, which has targeted funding to ensure broadband deployment and operation to locations in high-cost census blocks by the end of 2020. Unlike the stimulus funding, the FCC conducted an extensive mapping project to determine where broadband was not available and focused on funding for broadband by census block. In addition, the FCC included clear compliance requirements, program milestones, and significant penalties for failure to meet goals. Almost halfway into the six year program, we have already seen demonstrable benefits, and the program has a unique multiplier effect of increasing service to households surrounding the targeted census blocks. There is optimism that the next step for the CAF program—a reverse auction to distribute funds for broadband deployment in remaining unserved areas—will be similarly successful in distributing funds at the most market efficient rate possible.

Regardless of what federal agency is tasked with implementation of the next major broadband program, it is imperative that lessons learned from the FCC's CAF program, as well as from the BTOP and BIP, are taken into account. While incorporating something as complex as broadband into what constitutes our nation's critical infrastructure might seem daunting, the groundwork for what practically works and what doesn't has already begun. All that remains is a bit of tweaking and tailoring for the country to realize a significant return on investment for resilient, nationwide broadband.