Video games have been touted as everything from stress relievers to social bonding agents and even as developers of vital skills. But if you step outside yourself and consider the potential effects from the perspective of a parent, do you find yourself feeling differently? Are you more concerned when you consider the effects on a young child, perhaps someone as young as 5 years old? Considering the deeply ingrained role that video games have come to play in our lives – particularly during and post-pandemic – we figured some research was in order.

We spoke to over 1,000 parents of children who actively play video games. We wanted to know about the impacts they were personally witnessing, and how they addressed household rules and regulations around gaming. They shared their overall perceptions, strategies and concerns. We also quizzed them on ratings to see if their basic understanding of age-appropriateness was on par with today’s gaming landscape. If you’d like to grasp an experienced parent’s understanding of video gaming, keep reading.

How Do Video Games Influence Kids?

Our study begins with a look into the overall impact parents believe video games are having on their gamer children, with responses broken down by children’s ages. Then, we asked them to compare the overall impact they think games have against the impact of other forms of content, such as television and social media. Here’s what we found out. 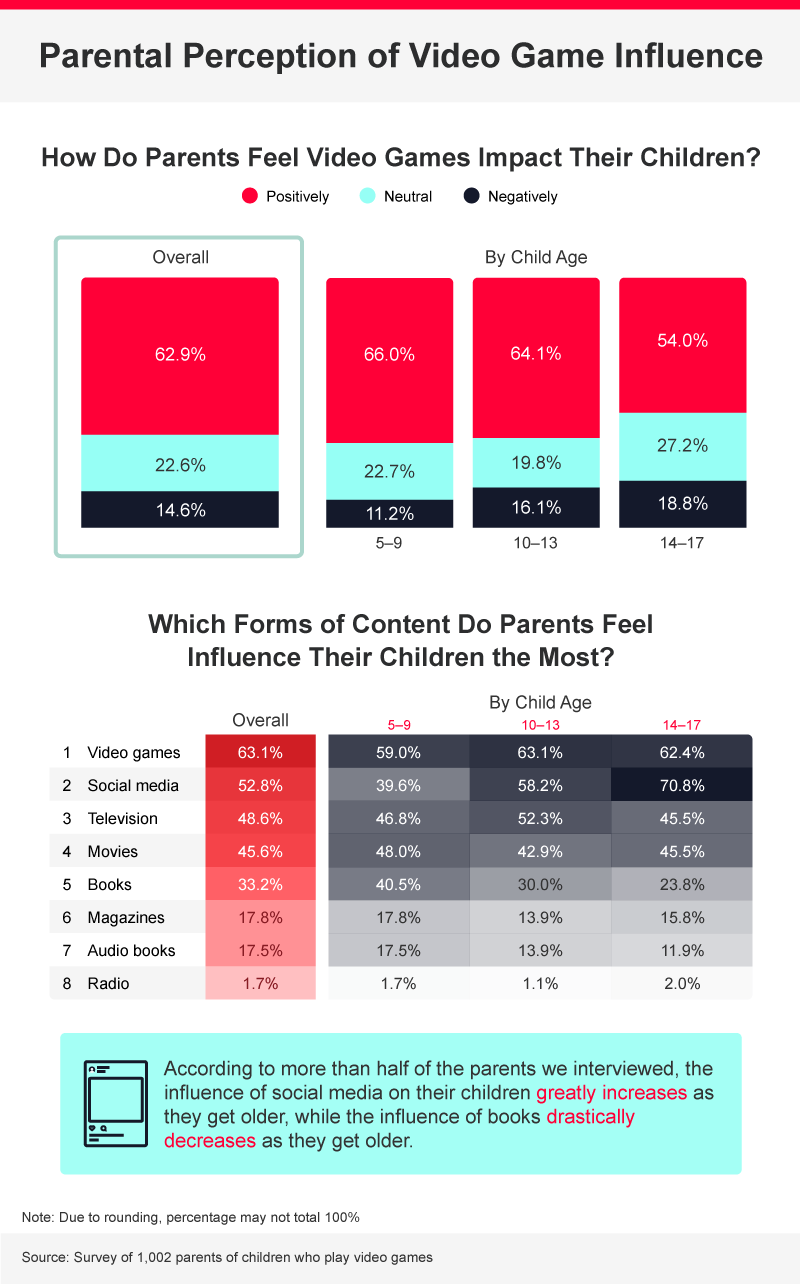 Overall, parents had overwhelmingly positive associations with the time their children spent gaming. That said, this sample includes only parents of kids who game, meaning that parents who choose not to let their children play games did not weigh in. That group may want to look at parents who allow it, though, as a whopping 62.9% said the impact video games had was a positive one. As their children grew older, however, a negative influence was more likely to be perceived.

Whether positive or negative, the influence of video games was extreme. In fact, the majority of parents surveyed agreed that video games had even more influence on a child’s life than social media. Since its (relatively recent) invention, social media has been documented by experts in child psychology (Dr. Catherine Steiner-Adair and Dr. Donna Wick, and the Child Mind Institute), as negatively influencing children and teenagers, inducing childhood anxiety and low self-esteem, among other things. Parents who participated in our survey only felt social media held a stronger influence than video games on their children once they hit the age of 14. Earlier in life, however, video games were viewed by parents as more impactful.

Keeping an Eye on Things

Parents of gamers have a variety of options when it comes to supervising video game usage. Developments in monitoring software or old-fashioned babysitting both offer their perks and downsides, while the child’s age may also factor into the approach. Below, we dissect the most common approaches to regulating a child gamer today.

According to our survey, parents have become much more lenient with regards to video games since the pandemic, allowing more game time and less supervision. Prior to March 2020, parents surveyed were allowing 2.2 hours per day of video gaming, on average. This number was already substantial, but it has increased by nearly 50% since then, now reaching an average of 3.1 hours of sanctioned video gaming every day. This may not include the time that children play without their parents knowing, but most parents (79.1%) considered themselves to be very aware of their child’s video game usage.

With this much time spent playing, parents were also having to put in substantial time just to supervise the behavior. More than half of parents monitored their children while they played games, with 58% physically staying in the same room throughout the session. Others relied on online parental controls to do the supervision for them. Whatever the method, most parents chose to restrict play to certain times (57.5%) or only allow games after homework was completed (56.1%).

The next part of our study asked parents to start thinking about the potential upsides and downsides to the time their children spent playing video games. The top pros and cons are listed below, as well as the types of video game material that parents found most concerning. 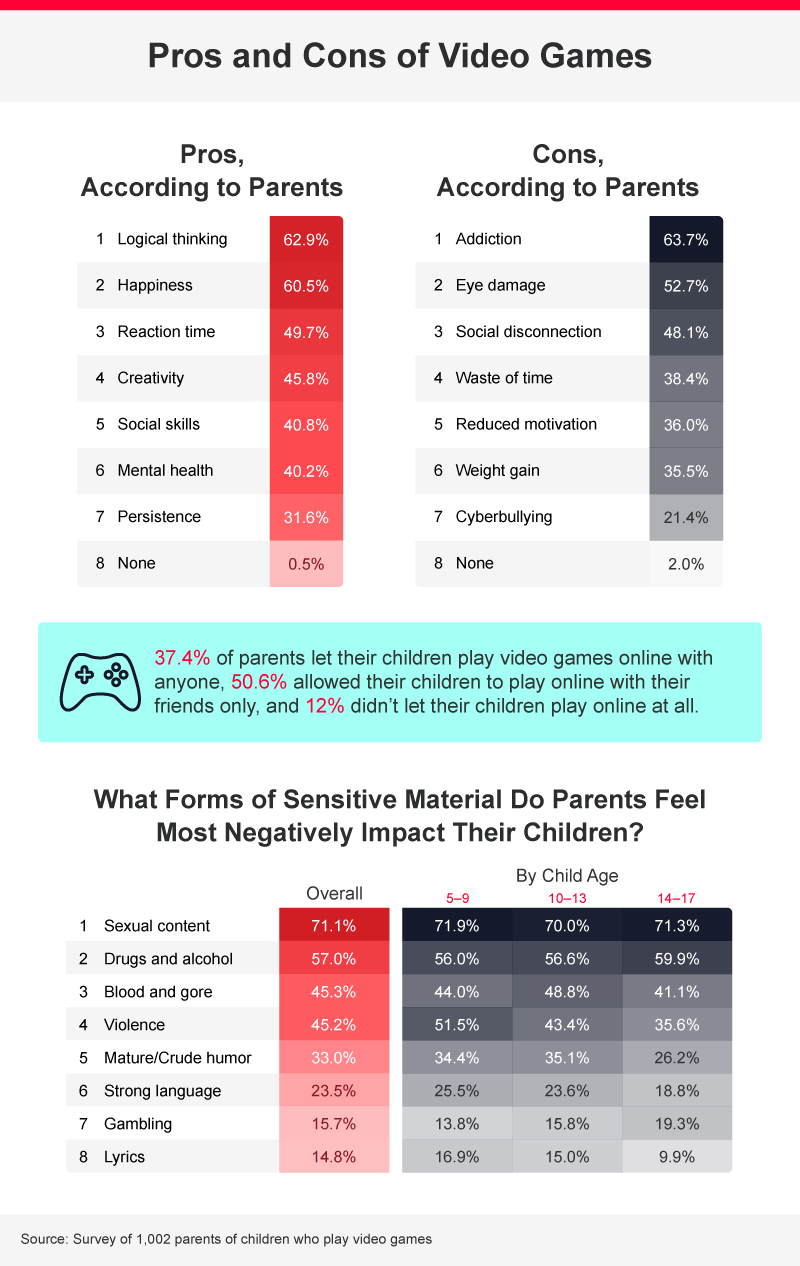 Logical thinking was the pro most parents were encouraged about as a result of their child playing video games, and prior research does back this up. Cognitive skills like critical thinking and logical reasoning can both be developed this way, though the particular game in question plays an enormous role. Fortunately, 62.9% of parents were aware of this positive development. 61% of parents even believed video games caused an uptick in happiness for their children, while 49.7% felt video games improved reaction time.

Of course, some bad came with the good. 64% of parents believed video games caused addiction development, while more than half were also worried about eye damage. Cyberbullying, which can have repercussions well beyond childhood, was also not an uncommon concern. More than 1 in 5 parents were worried about it happening to their child.

When the media dramatizes the impact of video games, we often hear of the violence portrayed and the potential violence it may cause. That said, the material that primarily concerned parents involved sex and drugs, not violence. 71% worried that sexual content was having a negative impact on their child, while 57% were concerned over the drug and alcohol use that took place in the games. Violence, while still common, was a concern for less than half.

The Entertainment Software Rating Board

The Entertainment Software Rating Board, or the ESRB, is an organization dedicated to providing information about what’s in a game. By their own description, this service is primarily for parents so that they can “make informed choices about which games are right for their family.” But how are parents actually using and interpreting these services? The next section of our study finds out. 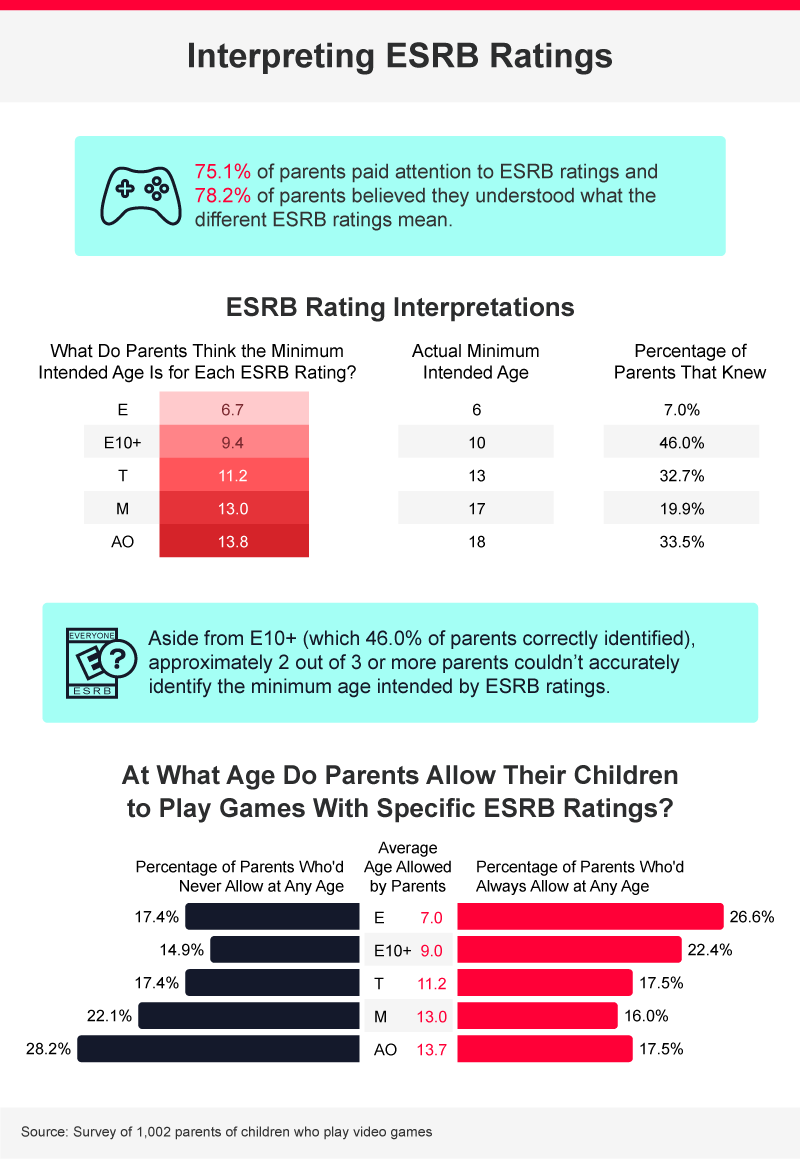 The vast majority of parents asserted that they paid attention to ratings designated by the ESRB. A shocking 78.2% of parents also declared that they understood each ESRB rating. We say “shocking” because of the results of a little quiz we gave them to see just how accurate this self-rated understanding really was.

When we put their knowledge to the test, most parents grossly overestimated their own understanding. Only 7% of parents understood what is perhaps the most important rating: E. This does stand for “Everyone,” but the rating actually means that it’s appropriate for children aged 6 and up. Considering that this rating affects the youngest of possible gamers, it’s concerning to see how few parents understood the meaning. The ESRB may want to take note of how effective it is to include numbers in the ratings’ acronyms. The rating “E10+” was correctly identified as being appropriate for children aged 10 and up by 46% of parents. This doesn’t represent the majority, but it does represent a significant improvement from the poor understanding of every other rating.

Moving past the general concept of ratings and into their specific applications, we wanted to know how parents thought popular games were rated by the ESRB. We showed parents a list of 12 incredibly popular video games and asked them to select the rating they thought it had. Here are their responses.

Parents had a tendency to think games fell primarily into two categories: E for Everyone or M for Mature. While this was often correct, it also led to some potentially hazardous errors. Minecraft, for example, is intended only for gamers aged 10 and up, yet a third of parents assumed it was for everyone. The intended use for kids slightly older stems in part because of the online community aspect of the game, which can expose children to things not intended by the developers.

Fortnite was also assumed by more than a third of parents to be rated either E or E10+, yet it’s actually rated T for Teen. Child psychologists and developers alike assume this game to be inappropriate for anyone younger due to the “kill or be killed” mentality, which can negatively impact very young children.

Parents ultimately demonstrated a healthy and responsible interest in the video gaming portion of their children’s lives. They allowed them to play more during the pandemic and even touted many perceived benefits. That said, the time and restrictions they invested weren’t necessarily coming from the most informed place: 2 out of 3 misunderstood ratings, and many were quick to prohibit games no matter what the ESRB rating was.

Whether you need to do more research about ESRB ratings, the impact of video gaming, or simply want to play the games, you won’t get very far without quality internet connection. Frontier.com offers a powerful and reliable internet connection that’s optimal for gaming, and all plans include the necessary Wi-Fi router and equipment. To start gaming or simply enjoying the beauty of fast internet, head to Frontier.com today.

The main limitation of this study is the reliance on self-report, which is faced with several issues such as, but not limited to, attribution, exaggeration, recency bias, and telescoping. Data are solely representative of self-reported claims. This survey ran during May 2021.

The gamer community is nothing if not welcoming of new ideas and information. If you know someone you think may benefit from the findings of this study, you are welcome to share the information with them. Just be sure your purposes are noncommercial and that you link back to this page! Please keep in mind that we are providing this information as a courtesy and as-is, and we cannot accept any responsibility or liability for any inaccurate or incomplete reporting.