Is the gaming industry getting better for women?

In the past few years, the video gaming industry has responded to an explosion of cultural and economic demand for female-friendly gaming: In 2020, the number of games announced at major press conferences featuring female protagonists nearly quadrupled in comparison to 2019. On top of that, the number of female gamers is growing so fast that the industry may not be able to keep up.

Still, the increase of women among gamers, streamers and developers hasn't always been met with open arms. In many corners of the gaming universe, women continue to report harassment from other players and some titans in the industry still have miles to go to establish true equality for women. So, is gaming usually a net positive or negative experience for women, and where do they tend to find the most accepting and inclusive communities? To find out, we surveyed over 1,000 women about their experiences as gamers. Here's what they had to say.

Like many hobbies, playing video games should help players relieve stress. It makes sense because leaving the world behind and escaping to a digital landscape where you can interact with other players, complete quests and generally do what makes you happy sounds relaxing. Of course, as with anything you take seriously, if you're invested in progress or the experience, there's always a chance playing games can leave you feeling anxious instead. 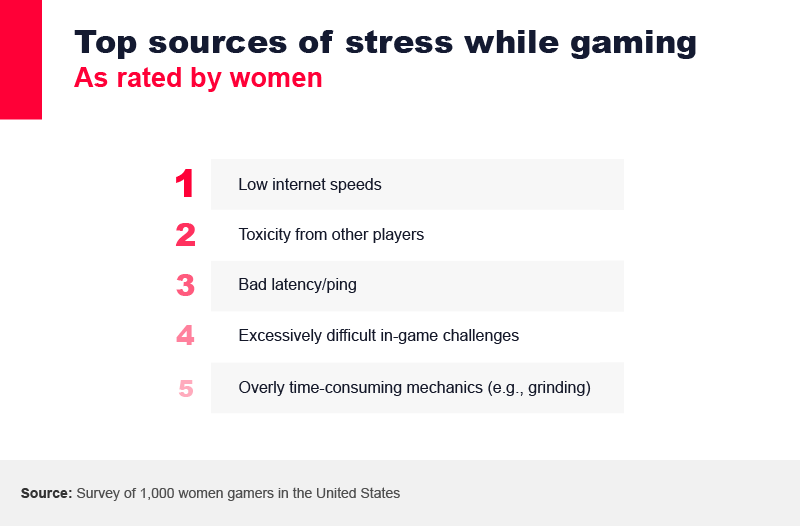 So, what stresses female gamers out? According to the women we surveyed, the most common source of stress was low internet speeds, followed by toxicity from other players, bad latency or ping, in-game challenges that are too difficult and game mechanics that are simply too time-consuming. For women looking to dodge some headaches while gaming, finding a welcoming space free of toxic players could pay dividends.

Video game spaces are getting more diverse, even if the perception of what the average "gamer" looks like is relatively unchanged. In 2020, 41% of all gamers were women, a figure that continues to grow year after year. By some estimates, women are owed the success of the recent economic boom in gaming as the one sector that continues to grow. 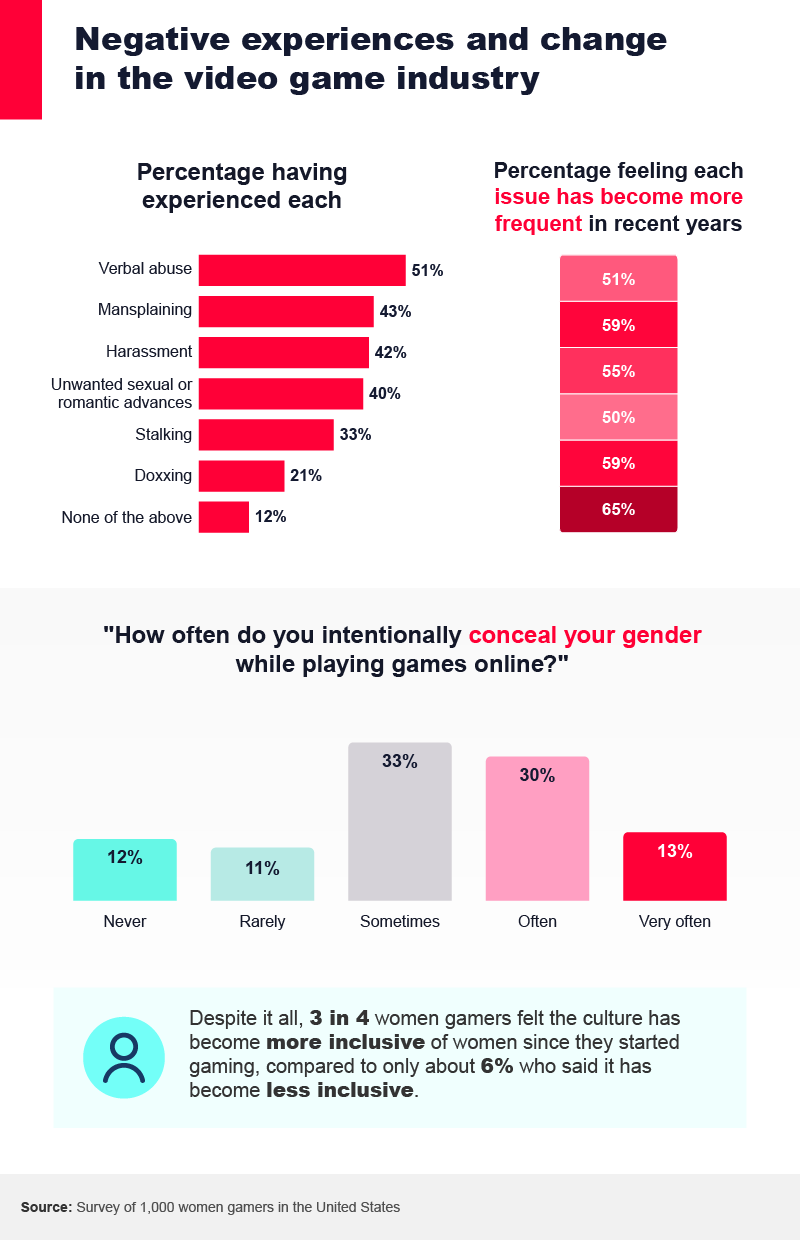 Still, women face challenges in gaming spaces that are still largely dominated by men. When asked about the negative gender-related experiences they'd encountered, more than half of women said they'd received verbal abuse (51%), followed by mansplaining (43%), harassment (42%) and unwanted sexual or romantic advances (40%). And the pervasiveness of harassment may only be increasing. Sixty-five percent of women reported doxxing (the act of publishing personal information about a person on a public forum) had become more frequent in recent years, and another 59% said the same of both stalking and mansplaining.

And while 3 in 4 women said gaming culture has gotten more inclusive since they started playing, a majority also admitted to concealing their gender when they play games online. In addition to the 43% who hide their gender "often" or "very often," another 33% said they do it "sometimes," leaving less than a quarter of women who rarely feel the need to conceal their gender while gaming.

What women love about gaming 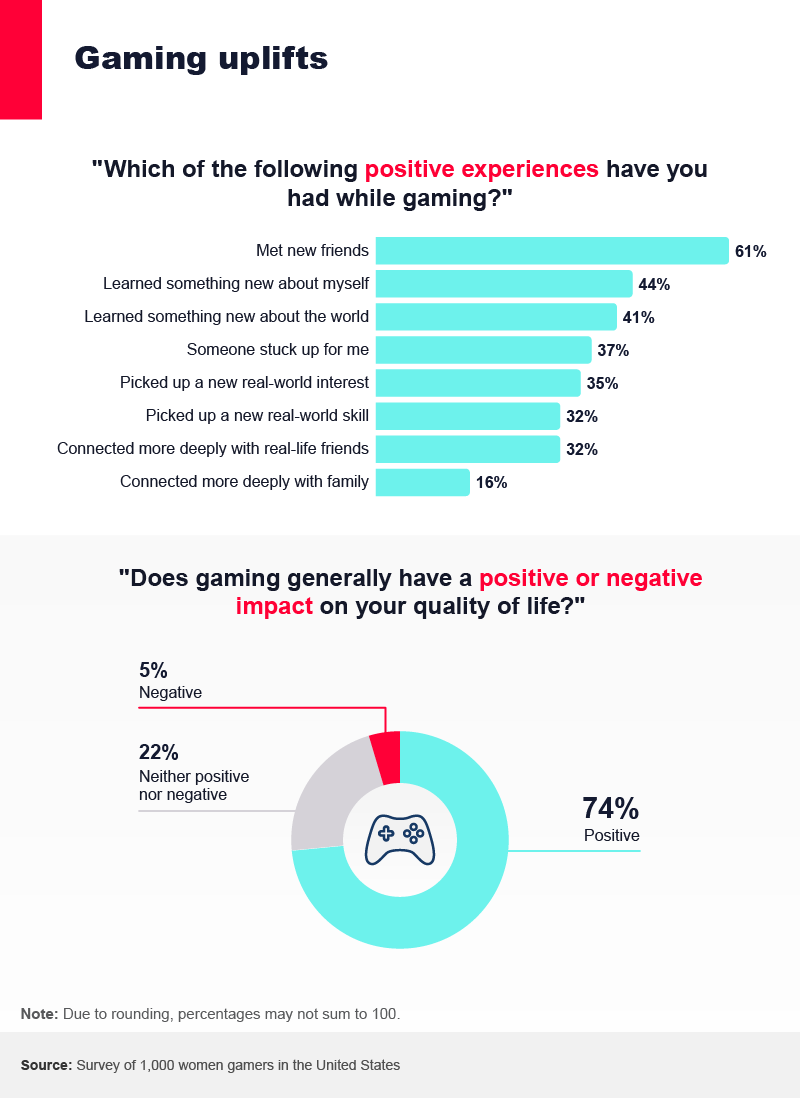 The pandemic's impact on gaming

The COVID-19 pandemic forced people inside, and for millions of Americans, self-quarantine meant the usual entertainment options had dwindled down to the things you could do safely from the couch. Perhaps naturally, the pandemic also resulted in a boom in the gaming industry, including the tripling of profits for Nintendo as a result of COVID-19 lockdowns. 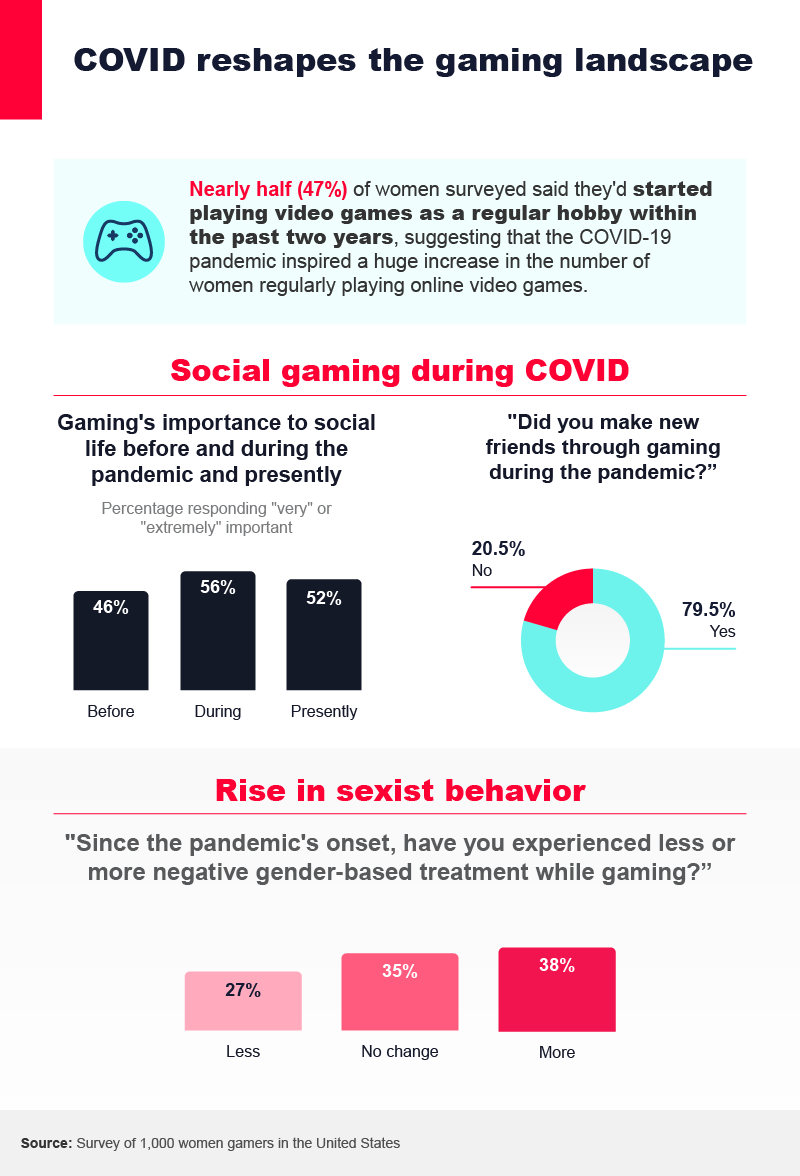 An island of opportunity

So, which gaming communities are the most friendly and inclusive? According to the female gamers surveyed, the top score went to Animal Crossing, which earned an average score of 4.15 out of 5 for friendliness and a 3.99 for inclusivity. Running a village for cute (but sometimes grumpy) animals, paying an obscenely high mortgage to a raccoon and pulling up weeds on a regular basis may not exactly sound like an evening well spent, but it's the perfect combination for the phenomenon that is Animal Crossing. With so much to do, players can progress through the game at their own pace, play it solo or pick up a DODO code to fly across to neighboring islands and interact with other players in real time. According to women we polled, Animal Crossing also had the most positive depiction of women within the game (we're looking at you, Isabelle). 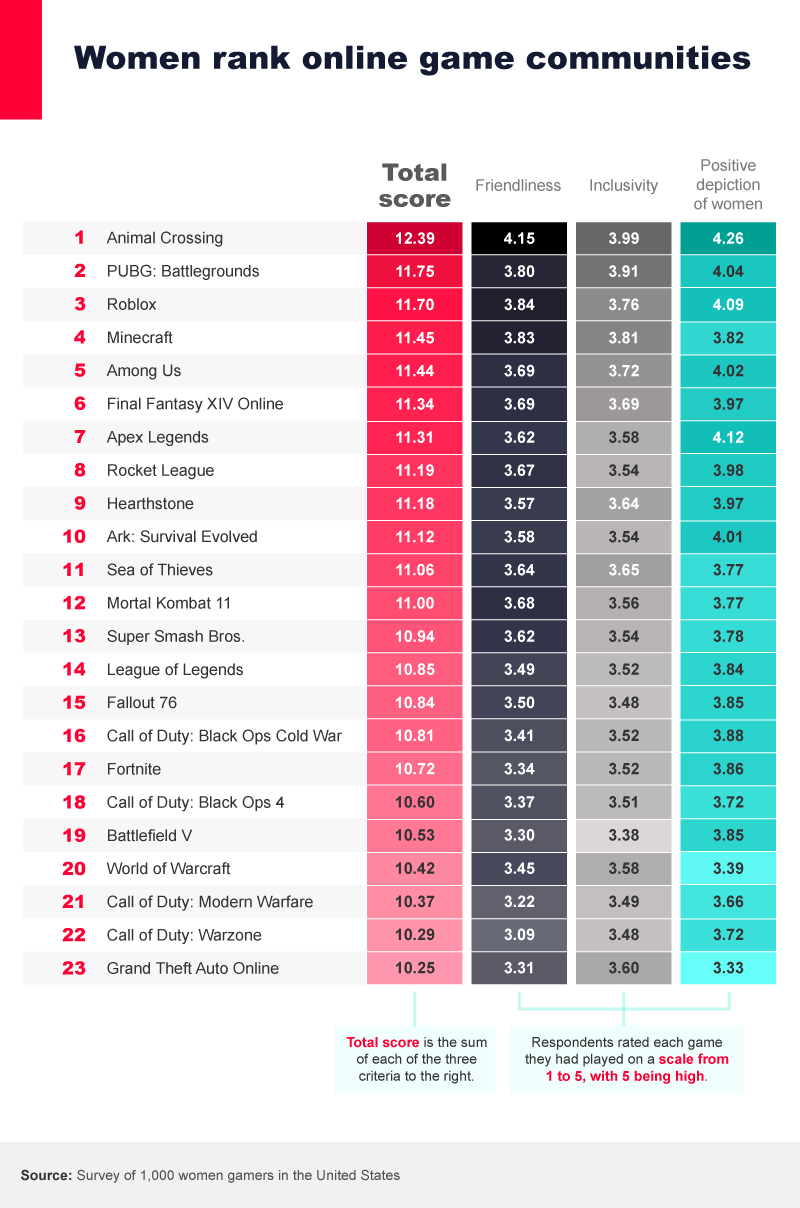 Other games women felt created a welcoming environment included PlayerUnknown's Battlegrounds (11.75), Roblox (11.70), Minecraft (11.45), Among Us (11.44) and Final Fantasy XIV Online (11.34). Ranking significantly higher than other popular MMORPGs (massively multiplayer online role-playing games), such as Sea of Thieves and Fallout 76, gamers said Final Fantasy XIV Online had a better depiction of female characters, was friendlier and felt more inclusive for women from their perspective.

The gaming community doesn't exclusively exist in games. Gamers gather across a number of online forums to discuss, debate, and interact with other like-minded players. As we found, some out-of-game gaming communities are more welcoming of women than others. 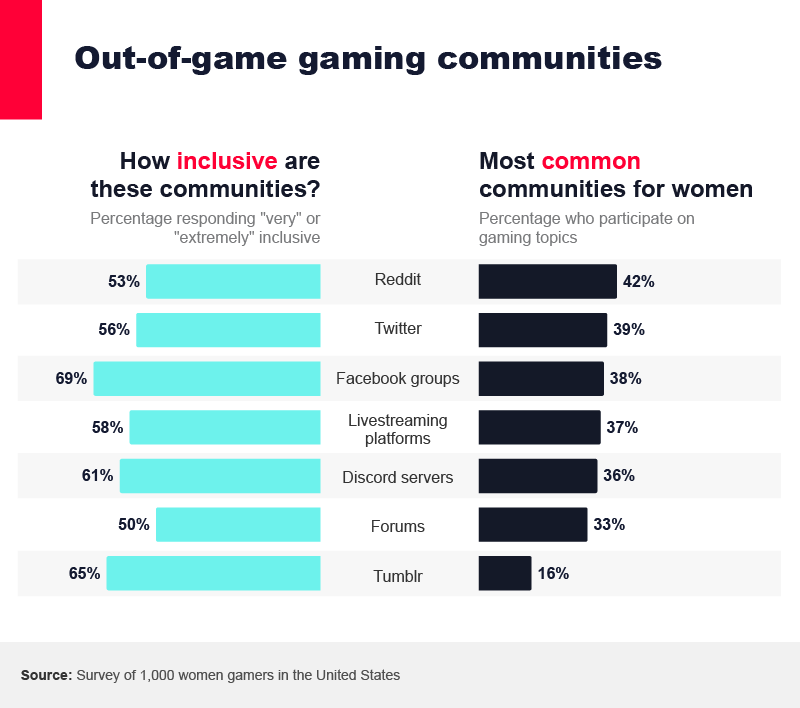 Reddit was the most popular forum among female gamers (42%), though just 53% said it was a very or extremely inclusive community. In contrast, Facebook groups, which may offer gamers the option to be more selective about the users they interact with, were deemed the most inclusive (69%), followed by Tumblr (65%) and Discord servers (61%).

Women aren't just gamers; they represent a massive and ever-growing part of the video game community. And despite their undeniable status, many have still encountered negative experiences as a result of their gender. But it's not all bad. In fact, female gamers were more likely to say that being part of the gaming community has a positive impact on their life, including the opportunity to meet new friends and to learn more about themselves and the world around them.

Female gamers told us they hate one thing more than anything in their gaming lives: low internet speeds. At Frontier, our mission is to deliver on what you need, no matter what you're working on. With connections designed to keep up, internet bonuses (including state-of-the-art router technology) and no overage charges or data caps, we're in the business of keeping people connected, which ultimately could even become what gives women a leg up in the gaming world. Learn more online at Frontier.com today.

Data used in this analysis and ranking came from a survey of 1,000 women in the United States who play video games for at least 30 minutes per day at a minimum of one day per week, on average. The sample was further restricted to those who had played one of the 40 games included in our study for a minimum total of two hours within the past year. The median age of respondents was 32. All respondents passed an attention check question.

To compile the ranked list of games, we first asked respondents to select each game they had played for at least two hours from the list of 40 games. Later in the survey, they were asked to rate each of those selected games on a scale from 1 (low, negative) to 5 (high, positive) for the criteria "positivity of community," "inclusivity of community" and "positive depiction of women in game." The scores for each game were averaged, and the scores from each criterion were summed to produce the game's "total score," by which we ranked them. To ensure sufficient sample size, only the games for which we had collected 100 or more respondents were included in the final ranking.

The survey data used in this analysis rely on self-report, which can exhibit issues including telescoping, recency bias and survey bias.

Want to help your readers level up? In true co-op fashion, we encourage you to share the findings of this study for any noncommercial use with the inclusion of a link back to this page so everyone has access to our full findings and methodology.

Please keep in mind that we are providing this information as a courtesy and as-is. We cannot accept any responsibility or liability for any inaccurate or incomplete reporting.