Tips to choose the best internet for gaming 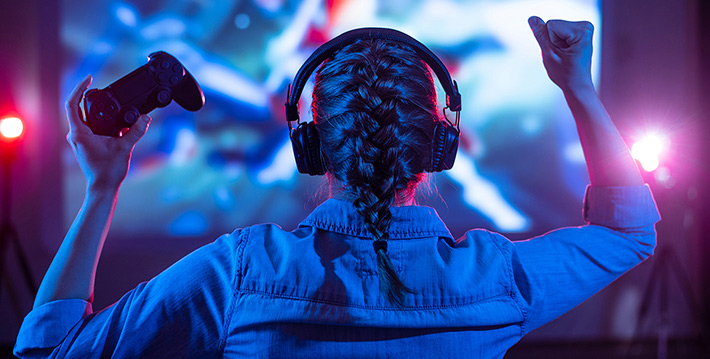 Online gaming is more popular than ever. It gives you a chance to connect virtually with fellow gamers and build friendships online. If you play online multiplayer games, you need the right internet connection to win.

Gaming online requires faster internet speeds than things like checking social media or listening to music. A slow or unreliable internet connection can crush your competitive advantage and lead to a very frustrating experience.

This article will tell you what to look for when you are choosing the best internet service option for you for playing games online. We’ll go over some internet concepts you should be aware of and introduce you to a few types of internet services.

What to look for regarding internet for online gaming

There are a few key things you should be aware of when choosing an internet service. You need a connection that’s fast and strong enough to handle the games you enjoy. In the next few sections, we’ll identify what you need to know about obtaining fast internet and explain how it can affect your gaming experience.

Connection speed is measured in megabits per second (Mbps). To play games online, you don’t need a bandwidth that is too high (3 to 6 Mbps). For example, you can play games like Fortnite and Call of Duty: Black Ops Cold War with a speed of around 4 Mbps. However, it’s recommended that you have fast speeds of at least 25 Mbps for a seamless gaming experience.

But why is a higher speed rate recommended for online gaming? You might be doing other things while you’re gaming (like chatting), or other people could be using your internet connection at the same time you are. You might also be accessing a game server at a high traffic time. An adequate internet connection lets you stay competitive even when your speed drops.

There is both download speed and upload speed:
Download speed is the amount of time it takes your computer or gaming console to receive information online. An example of a download would be buying and loading a video game on your PlayStation or Xbox. Another example would be streaming a film on Netflix.
Upload speed is how long it takes for you to send information online. An example of an upload would be sending an email or posting an image or video on a social media site.

When companies advertise their internet speed, they are usually talking about the amount of Mbps download speed their service has. Download speeds are faster than upload speeds in most internet plans.

Low ping and low latency rates are both important for gaming online. Ping rate is the amount of time it takes for a signal to get from your system to another computer. Latency is the lag time in between you making an action on your gaming device and the game or application responding to your request. Both latency and ping rate are measured in milliseconds (ms).

You want to make sure you have as little latency as possible. A noticeable delay between pressing a button and seeing the result on the screen can be extremely frustrating.

There are a few things that could affect your latency. The pathway that your connection is using and the quality of your router can contribute to latency. For example, if you’re using an ethernet cable, you’ll have much less latency than if you’re using a wireless connection to play games.

Latency has a huge effect on gaming. If your internet connection has a higher latency than someone you’re playing against, your moves won’t register as quickly as theirs, putting you at a huge disadvantage. This is especially important when you’re playing fighting games like Tekken or Street Fighter. For online gaming, 20 to 40 ms latency is recommended, and your latency should not be more than 100 ms at the very most.

Downloading games online can require a lot of data. That’s why it’s important for your internet plan to have a data cap large enough to download games. Data caps can be soft or hard.

The amount of data that you’ll need for online gaming depends on the amount of gaming that you do as well as the type of games that you play. At the very least, you’ll need a data cap of 50 to 100 gigabytes. Online games can require from 1 to 50 GB, on average, just to download, and you’ll need some extra available data to play them.

If you are continuously downloading games on a cloud server like Steam, you can eat data extremely fast. In that case, it might be wise to get an internet connection with unlimited data.

Internet connection types and how they impact online games

There are several types of home internet options you can choose from. They vary in things like availability, speed and reliability. The type of internet you need will depend on different factors, like how many people are in your family and the kinds of games you play.

Digital subscriber line (DSL) internet passes information through the copper wiring of local landlines (phone systems). Because DSL internet uses phone lines, factors like how far you live from the phone company can make your DSL internet slower. It’s not as fast or reliable as other internet options like cable.

Cable internet is more reliable and faster than DSL and is better for gaming. It runs on the same coaxial wiring that companies use to offer cable television. It’s also widely available. One thing to be aware of with cable internet, though, is that its bandwidth will slow down during high internet traffic times. It can also slow down when people in your home are using the same connection on multiple devices.

Fiber optic is the fastest internet and most reliable one of all. Fiber-optic internet carries information through glass cables. It’s less likely to slow down during times of higher traffic. Because it’s made of electricity-resistant glass, it’s also less likely to go down during a power outage.

Another cool thing about fiber internet is that it has upload speeds that are virtually equal to its download speeds. This makes things like video conferencing or streaming your gameplay in real time much easier and with higher quality. However, fiber-optic internet isn’t as widely available as cable or DSL because it doesn’t use an infrastructure that is already in place (phone lines, cable television, etc.).

If fiber-optic internet is available in your area, it is your best option for online and cloud gaming. Take a look at Frontier’s Fiber Internet plans that can give you an ideal online gaming experience.

By US News & world report

There are some fairly easy things you can do to strengthen your internet connection and optimize your gaming experience.

Connect with an ethernet cable

Wireless fidelity internet (Wi-Fi) is convenient, but it won’t give you the best connection for online gaming. For faster speeds and lower latency, you’re better off using an ethernet cable to connect to the internet. A wired connection is more solid than a wireless one.

If you don’t have an ethernet cable handy, put your gaming console or computer as physically close to your router as you can to improve Wi-Fi connection. Also, make sure there is nothing in between the two (like furniture) that can block the signal.

Limit other systems or downloads on your network

Other devices that are using the same internet can slow down your connection. Turn off any devices that don’t absolutely need internet access at the moment. Also, beware that systems will sometimes start downloading games and updates automatically. Check to see if anything’s downloading on your system and pause it before playing.

You might also try to game during lower internet traffic hours to get better performance. Usually, online traffic spikes in the evenings on weekdays and during the weekends.

Use a quality router

Typically, a quality router will help you get a stronger signal and smoother gaming experience. Routers with features like multi-core processors and copious amounts of random access memory (RAM) can help improve your internet connection.

It’s also important to keep your router’s firmware updated by periodically checking the manufacturer’s website to see if new software updates are available. Set up your router’s quality of service (QoS) options, as well. This will make your router give precedence to your gaming system over other devices using the internet in your home.

Some routers even have advanced QoS features that allow them to automatically prioritize internet traffic based on what systems need a better connection at the moment.

If you’re looking for great internet options from a quality internet service provider (ISP), Frontier has both broadband and fiber-optic internet plans. Here are a few of the quality choices we offer, including some options that are great for online gaming.

All our plans have straightforward pricing terms without hidden fees. We also don’t require a yearly commitment on your part.

Frontier has high-quality, reliable Fiber internet options. We offer plans with speeds of 500 or 940 Mbps that could work for you, whether you just want to check social media and listen to podcasts or be a hardcore gamer. Check and see what plans we have available in your location.

Frontier also has high-speed internet options available at 9, 25 or 115 Mbps service levels. Remember that if you plan on playing games online. See what services are available near you.